The senator, in his testament drawn up on 20 April 1942 and reconfirmed on 14 May of the same year, had established that his inheritance be destined to the creation of an institute named after him, for assistance to youth.

The senator, governor of Rome in the beginning years of fascism and president of the Italian Red cross, came into contact with the Abbey of Farfa through the Prior, Don Agostino Zanoni, to whom he was bound by deep friendship and faith, both human and religious. 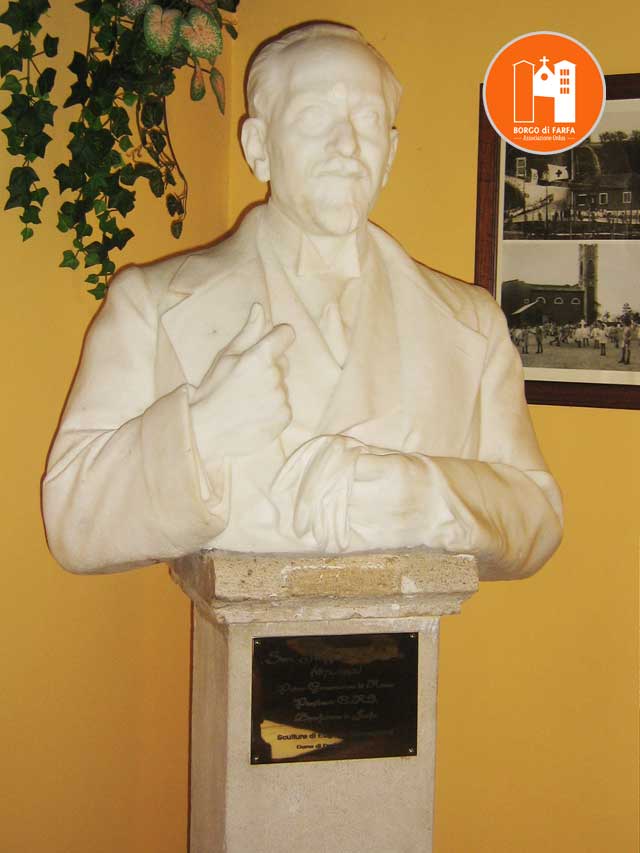 The scope of the institute by statute was to provide assistance to needy children, and all of the activities of its first years were characterized by this commitment.  Don Agostino Zanoni, the first president of the institute, immediately gave to this activity a direction in keeping with the desires of the donor.  In the same year, the estate of Farfa, consisting of about 200 hectares, was purchased with the scope of creating an establishment able to produce goods for the maintenance of the institute as well as to guarantee a professional outlet for the assisted children.  A windmill was also purchased to improve the functionality of the estate. Furthermore, an agreement was stipulated with the Red Cross to provide medical care for the children.

Later, the inclusion of boarding in the school of Farfa, maintained by the Benedictine monks, signaled the end of this direct commitment and the falling back on solutions of alternative assistance.

With Regional Resolution (“Delibera Regionale”) No. 5283 of 13 July 1993, published in the Lazio region’s B.U. of 30.10.1993, the institute became a privatefoundation.  It nonetheless continues to provide assistance and charity in the jurisdiction of the Lazio region, but above all, in the areas surrounding the territory that it owns, thereby becoming better acquainted with the needs of poor children.

The members of the Filippo Cremonesi Institute are the president, expressly designated by the founder, Senator Filippo Cremonesi, as the acting superior of the Benedictine Abbey of Farfa, and four counselors nominated according to the statute. The above-mentioned members, in order to better carry out their duties, avail themselves of the assistance of an entrusted technician and of a secretariat.

In order to improve both the appearance and the habitability of the Village of Farfa, the institute managed to carry out some works of public interest within the last 20 years. In particular, it restructured a multi-purpose room that it owned, provided upon requestfor conferences, exhibitions, and various meetings or simply to celebrate birthdays, anniversaries, or any other ceremony or occurrence.

Furthermore, it has designated a large area within the village as a public park, named precisely Cremonesi Park. Besides being a place of amusement for children of all ages and a place of rest for the elderly and the many tourists who visit the Abbey, it has been also used, because of its size, for cultural manifestations.  These include theatrical and musical as well as other events such as the Farfa Fair, dedicated above all to Sabine olive oil; the Independent Editorial Fair - paper books having reached their 7th edition; the Fair of rare and unusual plants (Farfa in Fiore) having reached its 4th edition; and the Fair of San Martino -Agricultural New Year, also reaching its 4th edition.

In order to safeguard the historic buildings, the institute has undertaken important restoration works and has also improved the seismic condition of some of the village’s buildings, having already restored many of them to their original antique splendor.

Above all, in order to accomplish its institutional goals, the institute donates the profits from its building management in the areas of the village of Farfa to the needy children of its parish and the surrounding parishes, as well as to the residents of the Lazio region. Furthermore, the institute collaborates with several cultural associations with an educational scope operating in the Sabine area.

It also organizes, along with the Benedictine community of Farfa, Melodies of Christmas, which in 2016 reached its 8th edition.

This year this will take place from 13 to 17 December, inside the basilica of the abbey.

The institute has a website, http://www.fondazionecremonesi.it/ and an email address This email address is being protected from spambots. You need JavaScript enabled to view it.