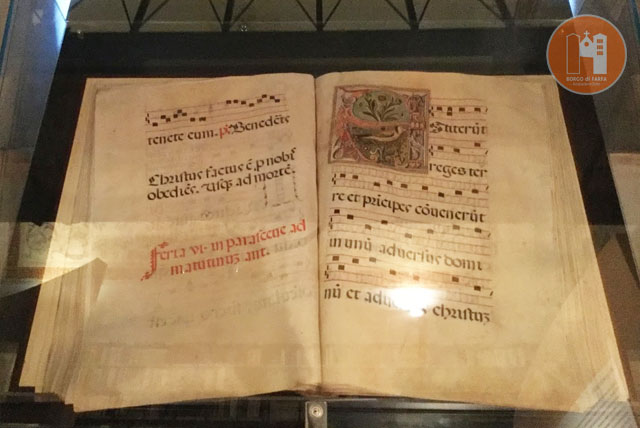 The state library of Farfa is located in the monastic complex of its namesake and today more than ever wishes to embrace the heritage of the great cultural tradition that the location provides.

Tradition has it that in Farfa a scriptorium has existed since the VIII century when the Abbott Alao compiled his Book of Homilies. Subsequently, with the growth of economic and political power, from the Carolingian Epoch to the XII century, there will be an abundant number of significant figures that will stand out.

Among these one must certainly note Abbot Ugo I (XI century) and above all Gregorio of Catino (XII century), author of the famous "Regesto di Farfa". Ugo I, in his "Destructio" affirmed that it was difficult to say how many and in what way the books of the scriptorium of Farfa were decorated with precious gems.

Subsequently, with economic and political decline begins a period of dispersion of this great patrimony that has lasted until today. Moreover, with the unification of Italy, a great part of this patrimony was confiscated.

Only in the first decades of the twentieth century, thanks to the work of a few monks, was there a resumption of the collection and organization of the books, until in 1947, the library, together with ten others in Italy, was inserted into the special category of "Library Annexed to the National Monument". The official inauguration took place on February 9,1964.

It was in the year 2000 then that, thanks to special funds from the Lottery games that were made available from MiBAC, of which the Library was a peripheral office, a project was provided for the structural reorganization, plant engineering, and cataloging of it's patrimony.